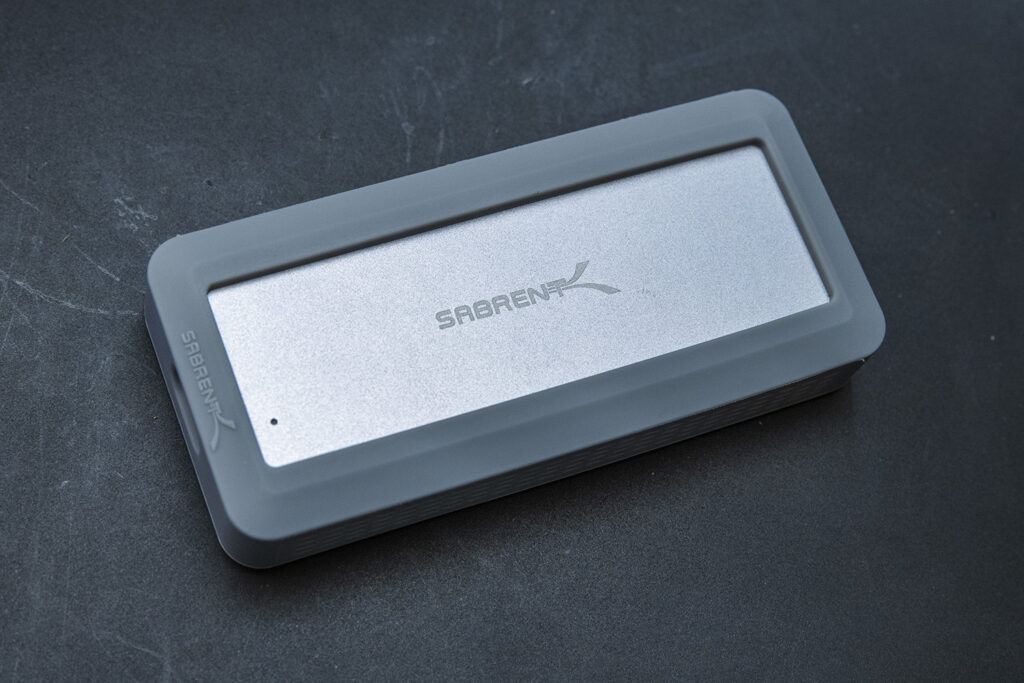 After upgrading my computer’s SSD a few months ago I had a spare NVMe SSD lying around that I no longer had a use for. It occurred to me that it would make a great portable drive if I could find a good USB enclosure for it. After trying a couple different external enclosures with sketchy results at best, I think I have finally found one that is reliable and fast enough to be worth the trouble over a typical USB stick.

The drive enclosure I ended up getting and liking is of course the Sabrent USB 3.2 Rugged Waterproof enclosure.

Included in the package are 2 USB cables, a USB A to C cable, and a USB C to C cable. Additionally, a small screwdriver, 2 NVME mounting screws, and four replacement screws for the case are included.

The Sabrent USB 3.2 Rugged Waterproof Enclosure is nicely built out of a relatively hefty chunk of aluminum, which is great because aluminum conducts heat well which is important when copying large amounts of files over, which is exactly what I’ll be doing with this drive. It is also sealed against water intrusion. And it includes an external rubber bumper that is there to help protect against falls. Sabrent rates the enclosure for falls of up to one meter.

A headlining feature of the case is an IP 67 waterproof rating and it is fully sealed internally and around the USB plug against water intrusion. The case is thick aluminum which is important because it needs to be rigid to seal properly against the internal rubber seals.

The rubber seals in black are visible on the inside of the case when it is opened:

So it does appear that this unit will actually protect your drive from getting wet, at the very least from rain or other kinds of splashes, although I’m not 100% sure I trust the idea of it being submerged in 1 meter of water for half an hour as Sabrent suggests it can do. Still, this is one of the few enclosures that offers this level of peace of mind for your important data.

The enclosure uses the JMicron JMS583 controller chip. Early versions of this chip had issues with certain computers and cables, fortunately, the chip has been updated and fixed in version A2. The updated chip is relatively recent having been released in 2019 and has been included in this enclosure which means you should be rewarded with trouble free operation on all platforms. The picture below shows the writing on the chip more clearly. Check out where it says QHF A2, that indicates this is the latest available version of the JMicron JMS583 controller chip that has all the bug fixes in it:

The JMicron chip is also great when it comes to performance as you can see from my CrystalDiskMark results below:

Of course, this is nowhere near the maximum speed for the drive, but it is still an impressive speed for a USB connected drive. To test it even further, I copied a ton of files into my NVME system drive to see what kind of speeds I would get with a real-life transfer:

It completed a transfer of 1.4GB in mere seconds and averaged a speed of around 550MB/s, which while not quite as fast as the theoretical maximum suggested by CrystalDiskMark, is still more than enough for transferring large batches of files. At that speed it would take about 18 minutes to transfer the entire contents of my 500GB drive. Not bad!

Of course, take these results with a grain of salt as they are going to be system dependent, and I actually don’t have USB 3.2 in my system (only USB 3.1) so it is possible it could be faster (or slower) on a different system. And if you do not have a fast SSD in your system you are not going to see high transfer speeds like this. For instance, while I have an extremely fast SSD drive for my system, I have a large magnetic HDD to store local media on. If I were to perform the above test with the magnetic HDD the speeds would be limited to around 130MB/s. Just something to consider when working out how fast this enclosure might be for you in your computer setup.

CrystalDiskMark is a highly intensive benchmark that will easily overheat a drive. The fact that the drive stayed well below its maximum temperature of 77 degrees Celsius after two test runs one right after the other means this enclosure has decent thermal stability. No doubt the beefy aluminum case is showing its worth here. Also, the fact that the drive is not being pushed to its absolute maximum of 2,500 MB/s probably helps as well.

One comment I have about the design is that the thermal pad only makes contact with the top side of the drive. Many drives have NAND chips on both sides of the drive. This could be seen as a bit of a miss, but in typical use the hottest chip on the drive is the controller chip. As long as the controller chip on the drive makes contact with the thermal pad (as it does in this case) things should work well.

The enclosure does get hot to the touch over time, which is a good thing because it means the heat is being conducted out, but there may be a thermal limit here which I have not reached in my limited use. Just leaving the enclosure attached and on for several hours resulted in a resting temperature of about 50 degrees Celsius for my Samsung 950 PRO. That is higher than you would want in a perfect world, but still within a safe margin for long term use. I could see reaching higher temps than I did in my tests in other use cases such as trying to edit 4k footage directly on the drive for hours on end.

All in all, this seems like a great enclosure. It is well made, has a quality controller chip in it, and delivers the goods in raw speed over USB. I have not had it long so I cannot comment on the long-term durability, but it does seem to be well made and is working for my needs. With the amount of heat these drives generate there is a minor concern for leaving it plugged in and on 100% of the time, however I think the aluminum build keeps things cool enough for the most part. If you want a solidly made, water-resistant, and good performing NVMe enclosure I recommend giving this one a shot!