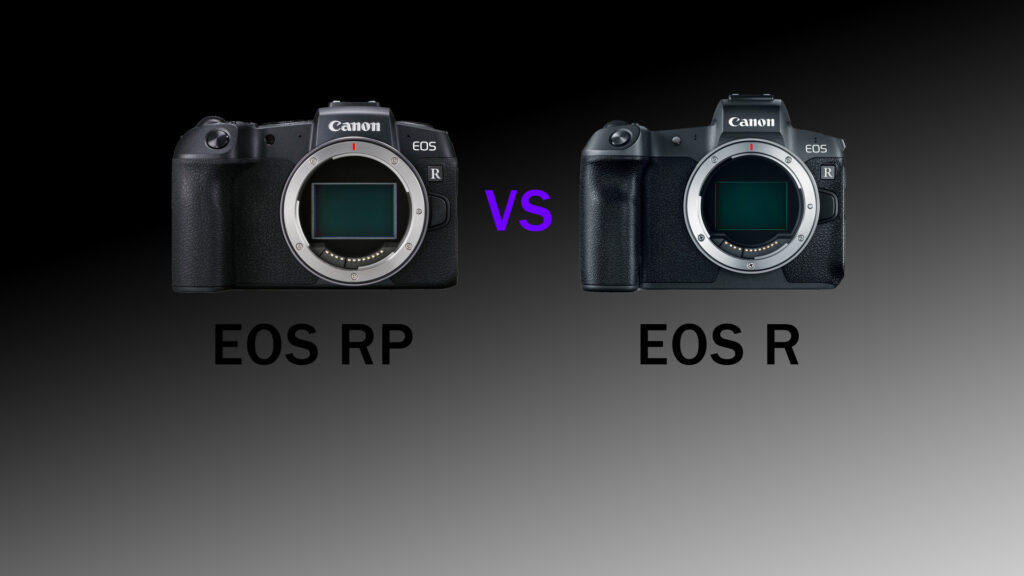 Many people have asked this question, which should they get? An RP or an R? The answer is: read on to find out!

In the following chart you can see the main specs for each camera:

Looking at specifications alone it’s tough to see the justification for the R’s higher price point. The biggest difference is honestly the weight and size of the two cameras. The R is more substantial for sure. But there isn’t a single specification to point to as a “wow” advantage over the RP. What can be said is that the R is a bit better in a variety of different ways. It is a little faster shooting, has a little better AF, a little faster shutter, a little better video quality, etc.

Both cameras are built solid, but the EOS R is definitely the more robust and solid feeling of the two. The EOS RP is lighter and smaller but that doesn’t mean it seems poorly made. In fact, it seems just as well made as the R does. For my larger hands I would say that the R seems to be a good fit, while the RP is a little too small. Canon makes a grip extension for the RP which doesn’t do anything in particular except make the RP a little weightier and taller.

The EOS R also has a battery grip accessory that extends the shooting time and gives the R a vertical (portrait) grip as well as vertical controls. With the addition of the grip the R feels like a traditional pro-level camera in hand.

Both camera’s have Canon’s standard flippy screen which makes shooting at waist level in portrait or landscape orientation super easy. It also will flip completely around and let you see the screen while taking a selfie with it. While the screen isn’t perfect for every use case, it is one of the best flip screens available due to the many ways it can be positioned.

Both camera’s use SD cards. But, while the Canon EOS R has a dedicated memory compartment the RP has it’s memory slot located inside the battery door next to the battery. From a functional standpoint there isn’t much of a difference, but the EOS R’s setup is definitely the slightly more convenient method for accessing the SD card.

It may appear that the RP has worse build quality, but one thing the RP has is a long lasting shutter. We’ve taken many thousands of pictures with it and never had a problem. The EOS R has had to have it’s shutter replaced after less than 100,000 pictures taken.

Personally I find that to be unacceptable for the R’s shutter to die so quickly. No matter how well made any part of the camera is the shutter is the most important thing. If that breaks the camera is a useless brick. Because of this the Canon EOS RP wins the build quality test by having a more durable shutter.

I’m not a big fan of the LP-E6 battery that the EOS R comes with. It doesn’t last more than 2-3 years of regular use and costs a pretty penny to replace. Despite this the EOS R does have a battery grip, so if you absolutely need that extra battery life you can get that for the EOS R with the grip.

The RP is a little less than the R but it also has a smaller battery. In normal conditions with a new battery it will deliver 200-400 shots in real world use. I have used it at weddings as a second camera only shooting intermittently and managed in the 400-500 range. But that is because I took a bunch of action photos with it during the ceremony then put it away.

Both camera’s are below average on battery life, but the EOS R probably wins because it can be used with a battery grip.

Under 1600 ISO the cameras are pretty similar, but the RP has slightly worse shadow retention at any given ISO. Details and colors are also similar between the two. If the R has more detail from its 30.3 MP sensor it’s a minor to non-existent advantage by around 800 ISO. I wouldn’t make a choice based on megapixels alone.

Both cameras control noise really well but the R ends up besting the RP in this regard above 1600 ISO. The R also produces nicer colors and smoother gradations at higher ISOs.

For anyone accustomed to shooting at different ISO settings the R will be a better option. If you’re the type who shoots at 100 ISO all the time, then the RP might be just fine for you.

For the most part dynamic range doesn’t have a whole lot to do with image quality for a SOOC photo. More dynamic range is something that gives more flexibility when editing. Cameras with more dynamic range typically allow the recovery of more shadow detail for a given exposure.

HDR Video Mode: One interesting feature of the RP is an “HDR” video mode. Whether this is actually HIGH Dynamic Range or just an in-camera HDR look is unknown, but it’s something to mess around with at the very least to see if the RP can get the shot you want.

I did a test of the dynamic range of still photos between the two at 100 ISO and my results are below:

I honestly don’t know if this type of test really amounts to much. I think the one thing I can say looking at this is that the R seems to allow wider exposure latitude by about 1-2 stops. That’s probably the most explicitly different thing between how these two cameras perform in terms of the image. It’s also probably the #1 reason why the RP is only $999 and the R is $1799. As of writing the RP remains the least expensive FF camera available. While the RP is certainly going to be usable for most types of photography, its in Lightroom or Capture 1 that the difference between the two will be more apparent.

As for the actual dynamic range numbers? It’s a bit of a tricky question there. If we’re just looking at Mario’s nose it’s pretty obvious that both cameras could go substantially further underexposed. But that doesn’t mean you can take usable pictures at those brightness levels. However, for some extremely flat lit scenes, there may be as much as a full stop more leeway than this experiment shows.

The important thing to take away from this is simply that the R will let you recover shadows better than the RP due to an apparently lower noise floor.

If you can only get one, which one should you get?

Whether you are interested in stills or video I would probably get the EOS RP. Neither camera is perfect but for the money I think the RP is a better option for anyone who would be trying to decide between these two cameras. The R’s advantages in dynamic range are really corner cases and the RP is very nearly as good. The EOS R does have nicer video I’m just not 100% sure that matters for the intended audience.

If you just want the absolute best image and video quality at the price point, then the EOS R is better than the EOS RP.

If you’re more concerned about the best value for your dollar, the EOS RP has probably always been the winner in that regard, it was designed specifically to be a high value product.

An example of a customer who should get the EOS RP would be high volume photographers who are more concerned with getting the shot as opposed to flawless image quality. Second shooters at weddings or event photographers would be well served by it I think.

An example of an EOS R customer would be lower volume photographers such as commercial or studio photographers who are more concerned with creating the “perfect” image in a highly controlled setting.