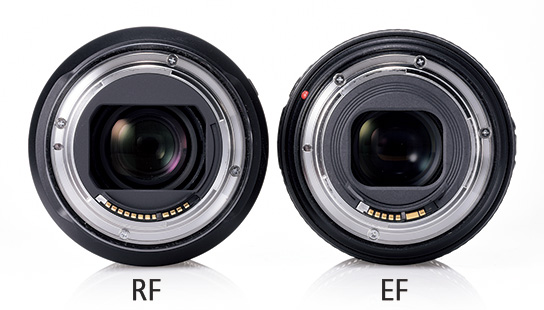 RF mount is the new mount from Canon that is used on their lineup of full frame mirrorless cameras.

EF mount is the older mount used by Canon in their Film SLR and Digital DSLR cameras (cameras with mirrors in them).

Can lenses from one mount be used on the other mount?

While EF and RF mount are similar, they are not interchangeable. In addition to different physical design of the flange which prevents the lenses from being mounted directly on a different mount, there are some other differences such as the number of electrical pins that make a connection between the lens and camera body.

Thankfully, EF and EF-S mount lenses can be used on RF mount with an EF to RF adapter. They’re widely available and pretty cheap. Canon’s standard EF to RF adapter is only $99 and works reliably.

However, RF mount lenses cannot be used on EF mount at all at the moment.

What cameras can use RF mount lenses?

Currently, the EOS R10, EOS R7, EOS R, EOS RP, EOS R6, ESO R6 mk II, EOS R5, and EOS R3 are the stills cameras that use RF mount. In addition to those the Cinema EOS C70, Cinema EOS R5C, and Red Komodo 6k are also able to use the new RF mount lenses. With the high quality of Canon RF lenses I think you can expect them to be quite popular with everyone including filmmakers just as the EF mount lenses have been for years.

Why did Canon make a new mount for mirrorless?

One theory I have is that RF is the first “digital” lens mount for Canon. A mirror is not necessary in modern digital cameras, so it has been removed, this is progress. With EF mount one could remove the mirror but the larger distance between sensor and flange would remain from the old film days, therefore the first truly “digital” mount would have to be all new.

Getting rid of the mirror may seem like a minor thing but it is pretty major. The mirror and the systems bound to it, such as the old-style phase detect AF are a significant limitation in how fast the camera can operate.

Think about how the mirror-based AF works, when the mirror flips up, the AF shuts off, and it cannot turn back on until the mirror is brought back down and rested in position. When shooting rapidly at 12-20 frames per second, the mirror spends most of its time moving in and out of the way, which means the mirror is severely limiting how well the AF can track a subject.

By taking the mirror out of the camera, not only is the relatively slow movement of the mirror eliminated from the equation, but the AF system is now able to function during more of the time before and after image capture occurs.

This is why cameras like the EOS R5 are able to shoot at 20 frames per second in electronic shutter mode and still maintain excellent subject tracking while doing so.

Why does the RF mount have more pins in the camera body and lens?

RF mount has more pins than EF mount. Even though EF mount is very similar to RF mount in design and concept the theory around it was different as it was actually designed in the days of film. It wasn’t until about 15 years later that DSLR’s were released and digital camera technology began to squeeze film technology out of the marketplace.

It’s important to know when EF mount was designed because in the days of film there was no possibility of “correcting” the image in-camera. With digital cameras built in lens corrections are the norm. That is why on RF mount the lens corrections for every RF mount lens are stored in the lens and these corrections are passed to the camera in real time for every focal length, aperture, and focusing distance.

Because of these real-time corrections shooting video with an RF lens on an R5 is perfectly corrected all the time regardless of the focal length or aperture selected.

The extra pins on the RF mount allow the camera and lens to sync up quickly while zooming in and out ensuring you always have a perfectly corrected image in your viewfinder.

Stabilization taken to the next level

Another feature of RF cameras like the R5 and R6 is that they have IBIS (In Body Image Stabilization). IBIS is great for a lot of situations, especially shooting video and lowlight photography. In order to improve the performance of IBIS Canon cameras and lenses have tiny gyroscopes inside of them which measure the slightest movements of the camera and lens as you use it. These corrections must be incredibly finely tuned in order to produce a sharp image on a camera like an R5 whose pixels are barely larger than a single micron. Therefore, in order to maximize the performance of this system additional lens-body communication channels were added to make it possible to track the position of the camera in space with a very high degree of accuracy.

Even lenses with no IBIS in them are fully stabilized on the R6 and R5, partially because they have gyroscopes in them as well that measure their position in space. Lenses like the RF 28-70mm are rated for 8 stops of stabilization (CIPA rated) on an R5 and R6, and that will be improved to 9 stops on the R3. It’s all made possible by the enhancements built into the RF mount lenses and cameras.

Dual sensing IS and Hybrid IS

Going further down the rabbit hole of IS we encounter a new technological supremacy. That of dual sensing IS. Yes it is quite astonishing. With the dual sensing IS information seen upon the sensor itself is utilized to communicate stabilization information. In essence the camera is using digital stabilization techniques to enhance physical stabilization found in lenses with IS built in. You can think of it as the camera “watching” the sensor to see how to react much as you would watch the rear screen or EVF. The difference is the camera is reacting much faster and more precisely.

In keeping with this sensor enhanced IS we go further down the rabbit hole eventually reaching Hybrid IS. In this mode the IS systems within the lens and the IBIS system within the camera (R7, R6, R6 mk II, R5, and R3 only) are combined together to produce an enhanced stabilization effect. An interesting aspect is that this arrangement can account for pitch and yaw in addition to normal camera shake. From what I understand the OIS system in the lens account for pitch and yaw, and the IBIS system accounts for movements on the X and Y axis.

The EVF is easier to use than the OVF

If you’re worried about losing the mirror in your camera don’t be. OVF is great, don’t get me wrong, but there are many issues with OVF that can really only be solved using more advanced technology which can also be applied to making EVF’s better. One big advantage of EVF vs OVF is that the focusing is done directly on the sensor, whether you use manual focus or autofocus, perfect alignment is all but guaranteed. Another big advantage is being able to see the exposure, this can make creative exposure easier to visualize. OVF also allows more information to be displayed on screen. When working fast in chaotic conditions this can allow faster and more precise control of the camera. The old days of photographers stoically and methodically selecting their photos with careful positioning and control of settings are gone.

The RF mount is larger

This means larger aperture lenses like the RF 28-70mm f/2.0 will be possible on RF mount.

The RF mount lens back focus distance is shorter

In the old days of film there was this company called Leica that steadfastly refused to make an SLR for a very long time, essentially dooming their business in the process. Their style of camera was known as a “rangefinder”. The rangefinder was considered inferior to SLR’s but they did have one advantage: because rangefinders have no mirror in them they had a reduced back focus distance between the lens and the plane of focus.

With the sensor closer to the back of the lens it is easier to focus the image on the sensor.

RF mount has a control ring

It is quite possible that the control ring could have been done on EF mount but just wasn’t. It seems like Canon could add something like that to future EF mount lenses, I have no idea.

In addition to a control ring, some RF mount lenses also have programmable buttons on them that allow photographers to quickly change settings that would normally require digging through the camera menu.

Some photographers wonder if their EF gear will soon be obsolete, my advice is not to worry about it. EF lenses are still really good, not as good as RF but if you appreciate the look different lenses give there’s nothing stopping anyone from being creative and artistic with any of the awesome EF lenses that have been made over the years. It’s especially true with the modern editing solutions we have now. I always laugh when some reviewer will say something like “this lens renders a little green”. Ok then, white balance it differently. The crazy thing is it’s not really possible to compare lenses on a digital camera. It’s software, software sometimes has bugs or mistakes in it. You never know, the next version of a camera might show the lens that renders a little green to be perfectly fine.

What did I do?

When RF mount was announced I was naturally excited about it. Canon had been accused of not doing enough with their DSLR camera lineup in the recent past. But when they released the EOS R it hit the market with all the enthusiasm of a wet mop. Basically, people were not impressed on the whole. And while it was certainly a serviceable camera it was also very much a bit of a WTF moment. It even had some people questioning if Canon was serious about the RF mount. Then they released the EOS RP and people were even more confused. So now we had a bunch of really high-end expensive lenses, and two camera bodies with decidedly amateur level controls and performance to use those lenses with… *confused stares*

Whether by design or by accident the question marks turned into exclamation marks when the R5 was announced. People piled onto waiting lists to own it, and I excitedly added my name to the list as well.

The R5 has been a great camera so far, and it has seen some updates that have improved it, thankfully. It wasn’t perfect at the time of launch but has improved in important ways, particularly with the quality of the focusing.

Full Frame vs crop sensors, which is better?