What is 8k resolution good for? 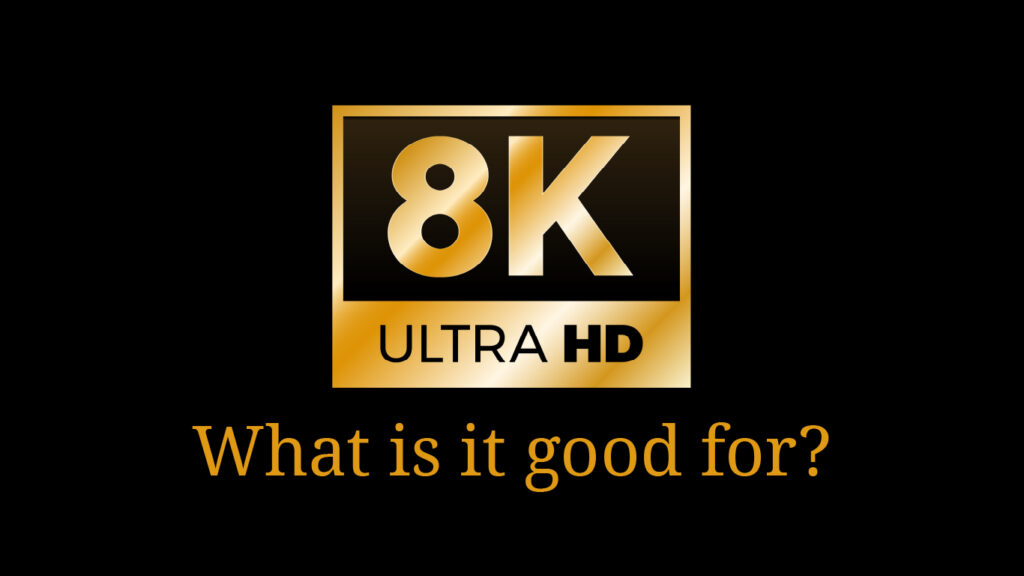 I see a lot of questions on the internet regarding 8k resolution. Most of them go like this: “What is the point of 8k, nobody even has an 8k monitor.” Or I often see these ones: “8k crashes my computer, I can’t even use it so I don’t want to pay to have it in my camera.”

The first benefit of 8k has nothing to do with shooting 8k.

The first benefit of 8k on a camera like the EOS R5 is that the 4k is oversampled. Not only is the FF output oversampled, but the crop 4k is also oversampled. So with the EOS R5 you can shoot oversampled 4k in APS-C crop AND in 35mm Full Frame. BTW, I’m not saying you should run out and buy an EOS R5, but it’s one of the few 8k capable cameras out as of writing so naturally it gets mentioned a lot in a discussion about 8k.

The great thing is using this in camera to extend the focal range of a lens using the crop mode. It’s like an instant 1.6x teleconverter with no optical side effects, in fact, on many lenses the image will be sharper across the frame in crop mode than in FF mode.

The second benefit of 8k is in post production.

You might shoot 8k video for different reasons, but a big one is what you can do with the footage after the fact in post production when you are targeting a lower resolution like 4k.

One option made available if you shoot a little bit wider than necessary at 8k is that you can add in digital stabilization in a program like Adobe Premiere.

The way digital stabilization works is it essentially crops in the image and aligns each frame so that it appears that there was no “shake” visible. Shooting in 8k lets you execute this function on your footage while still keeping 4k resolution on the resulting fully stabilized footage.

Another thing you can do with 8k in post is add in a digital zoom. It’s an effect I’ve seen a few times used in movies. A fast snap zoom that lets you pop in faster than would really be possible with a mechanical zoom lens. This effect is actually really cool and can have a “how’d they do that” feel to it.

Yet another option is it enables you to carefully reframe your subject after the shoot. Many videographers don’t do this as much as they could or should, but it is something that photographers do all the time. Even on a major production shooting in higher resolution and zooming out can loosen the tolerances so to speak in getting the shot as opposed to trying to constantly “get it right” in camera. Let’s admit it, getting perfection in camera is well-nigh impossible sometimes, but I also think it makes sense to try (for the sake of the art).

Another benefit of 8k is future proofing

8k is so much resolution for video it’s almost future proofed for all time. Unless future devices come with their own big screen projectors built in, or some kind of human/computer mind melding capability its hard to imagine a scenario where more than 8k will be needed for a phone screen. There are quite a few reasons why that is true owing to frame rate, shutter speed, motion blur, flicker fusion rate of the eye, angular acuity, viewing distance, and probably other things.

Basically, as video gets higher resolution the shutter speed has to increase to reduce motion blur. Otherwise, your 8k movie is just a whole mess of blurry pixels. But, as one increases the shutter speed, the frame rate must also increase to fill in the perceptual gaps. The way this works is called “persistence of vision”. It is what allows a low frame rate like 24fps to appear “normal”. But it has one caveat, it works best if the image has motion blur in it. When blur is removed the mind isn’t “tricked” anymore and we start to see the individual frames. Because of that when increasing the shutter speed the gaps between frames must all shrink to match the amount of motion blur within the frame. At a mere 60fps however the frame rate limit of the human eye is reached. This means that whatever the shutter speed needs to be at 60fps is the limiting factor for the resolution that the human eye will actually see. If we use the standard 180 degree rule, then the shutter speed at 60fps should be 1/120th of a second. At 1/120th basically everything will be blurry by a pixel or two at 8k resolution. On an EOS R5 for instance the pixel pitch on the sensor is 4.3 microns. That means anything that moves more than 4 microns across the sensor in that 1/120th of a second will be blurred by one pixel, thus halving it’s spatial resolution. To give you an idea of something that is 4 microns wide, it’s smaller than a human red blood cell.

Yep, video will never be sharp to the human eye at 100% view in 8k resolution. Photos on the other hand obviously can be.

And if you’re thinking maybe somehow there’s a way to increase the shutter speed and pack in more frames at like 120fps, well, that won’t do much for the perception of resolution either. Proof? Wave your hand back and forth in front of your face, did you see a big blur?? That’s exactly what happens with your pristine movie footage, it just gets blurry to the eye anytime something moves.

Think about this, when you look at your phone does it need to be held still in order to read what is on it??

When you read a book does it need to be held still in your hands in order to read it??

Anything that moves, even a little, drastically cuts down the spatial resolution of the eye due to motion blur.

There are some unique cases where more resolution could be useful, such as in the new spherical auditorium being built in Las Vegas called the MSG Sphere at the Venetian. It has a 400 foot tall curved movie theater screen on the inside. It seats 17,500 people so is much larger than any normal theater. It’s basically whatever comes after IMAX.

I doubt we see a lot of 400ft movie spheres popping up all around the world where 17,500 people are going to gather all at once to watch the new Harry Potter movie on a screen literally the size of a small mountain. Sounds cool, but it also sounds like a big hassle. Can you imagine the noise of 17,500 people eating popcorn and shaking ice out the bottom of their cups all confined in one room? Yikes. On the other hand, can you imagine the odd silence if only a few people showed up for a movie showing? LOL. You would be able to hear a pin drop. I can imagine someone farting and then hearing someone else laugh about 100 rows up.

It looks like 8k is where it’s at! In my humble opinion 99% of viewers will find that 8k is more than good enough for their needs.

And there you have it … that is what 8k is good for.

It turns out 8k does have some excellent use cases, there is a point to it that we can all appreciate. So, you can stop saying “What’s the point of 8k” over and over again.

Why do photographers need more than 1 lens?