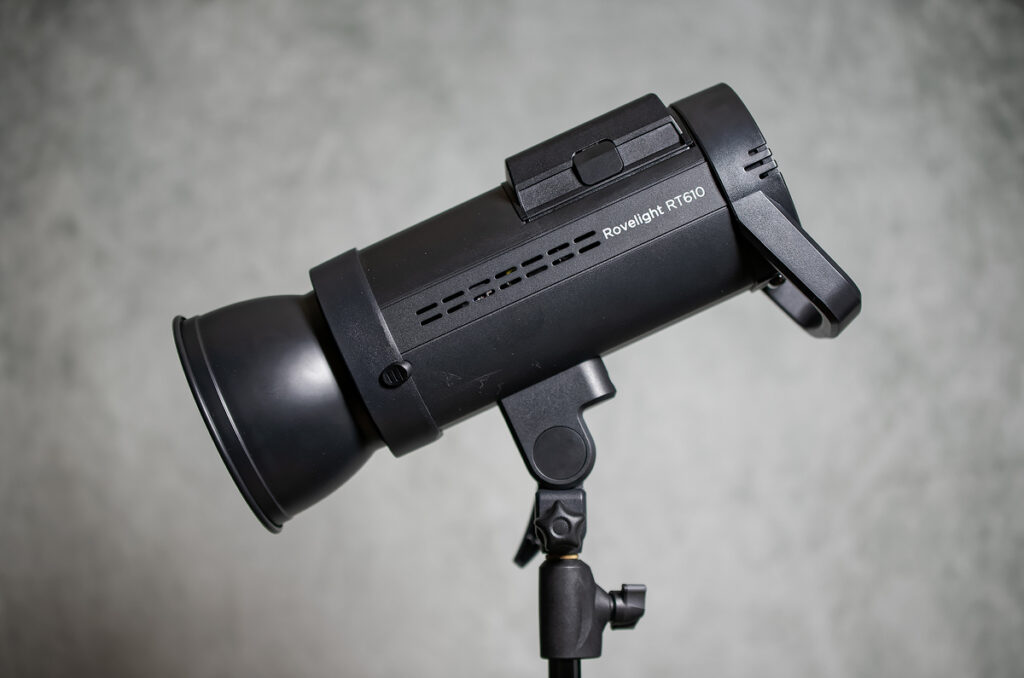 The Orlit RT610 is a battery powered studio strobe from Orlit, sold exclusively through Adorama in the USA. The strobe is designed to be triggered wirelessly using Canon’s RT wireless protocol developed for Canon’s recent flashes. This powerful 600Ws flash is priced well at about $400 for the strobe at Adorama. With such a small outlay of cash relative to other competitors in the battery powered strobe marketplace, I’m excited to see how this unit will stack up in a real-world scenario.

Highlights of the Orlit RT610

The packaging is suprisingly well designed for a low price product. Upon opening the box you’ll find the strobe neatly tucked away in it’s carrying case with a protective cover over the bulb. The other required elements like the battery and charger also fit into the case nicely. A carrying strap is included for the case but I find I don’t use it, instead I tend to carry it by the attached handle.

The overall build quality is adequate but not luxurious. The plastic body feels solid enough but isn’t quite confidence inspiring. There is a robust integrated handle at the back that can be used to carry or adjust the light while it is on a stand. And the stand mount on the bottom of the unit seems well made with a full sized adjustment handle that makes changing the light angle a breeze. It’s got some weight and substance to it, but I don’t think it would survive being dropped on a hard surface from anything more than a few inches.

My first impression is I think it’s a little better than expected in build quality and implementation.

The power on this light is great. If you are just getting started with off camera flash you’ll be amazed at how much more light this thing puts out compared to a standard speedlight. Frankly there is no comparison. It’s a monster that can put out enough light for a variety of scenarios even when using HSS.

I like to keep my lights close to the subject so I rarely go above 1/3rd power. It has no problem filling a huge umbrella or softbox at those power levels either. If you need to stop down to f8 or lower for some reason there is plenty of power on tap to meet your needs without maxing out the light.

The bottom line is that it seems like a 600Ws light as advertised.

Recycle times are pretty phenomenal with this strobe. I have found that at lower power settings you can easily have two people shoot with one strobe, something that is possible by simply using two of Orlit’s transmitters.

In the rare instance that I have used the higher power settings it does slow down a bit. But the timing remains predictable so you can work with it pretty easily.

TTL works great. Overall I found it to be comparable to Canon’s 600EX RT-II in consistency of exposure. It also worked as expected regardless of which metering mode I was using.

Battery life is not an issue with this strobe, at least not in my testing. I found that it will easily go for 5-700 pops at lower power settings. The batteries are a little slow to charge up but it’s to be expected probably considering how big they are. A new battery will set you back about $90 which seems high compared to the strobe’s current street price of $400 USD (as of writing).

I find the strobe to be very easy to use. If you’re familiar with or have Canon RT flashes or the Canon ST-E3-RT transmitter it works seamlessly with these products. I was able to easily set the channel and group to trigger one or more Orlit strobes with my Canon 600EX II-RT. I also experimented with triggering the Orlit strobes and another 600EX in slave mode when using a 600EX as a master. This also worked as expected. However if you’re using the Orlit TR-Q6 transmitter triggering the RT610 and a Canon 600EX together requires the use of a special mode on the transmitter. Figuring that out was a slight pain but eventually I was able to get it working.

Controlling the power of the RT610 is very straightforward although you only have control in 1/10th increments when using the Orlit TR-Q6. If you’re using the RT 610 in optical slave mode you can control the power with the knob on the back of the strobe by simply walking up to it and turning the knob at any point. You’ll also be able to set the power in more precise 1/10th increments this way. With 600Ws of power on hand it’s nice to have that fine control over the output.

An interesting option with Orlit’s transmitters is that they can be used on different camera brands and still trigger the RT 610 in manual mode. At a shoot I was able to give a friend who shoots Nikon my Canon version of the TR-Q6 transmitter and he was able to trigger the RT610 in manual mode. However, if he wanted to use the TTL function of the RT610 he would need to purchase the Nikon version of the TR-Q6. Even though you can’t use TTL cross brand it’s still nice to be able to use this strobe with different camera brands in a pinch without needing to purchase a transmitter for each brand.

The output consistency of the RT610 is pretty good, but not perfect. Even though it’s not perfect I think the light is good enough for studio use. Importantly I haven’t had any misfires with the RT610. When it’s ready to fire it generally fires properly at the selected power level. I did have issues with the TR-Q6 transmitter on some cameras. For whatever reason when shooting on the Canon 77D in HSS mode the TR-Q6 won’t sync the shutter properly. It works fine in normal sync. I emailed their support about this but as far as I know, it was never fixed (they have since released an all-new transmitter). I also noticed some slight shutter sync issues at certain power levels. On my strobe, it is possible to notice the sync issue when shooting with a single light. The solution here is to simply use a different power level. The TR-Q7, a new transmitter out from Orlit might address these issues, but I haven’t tried it out yet. The minor sync issues whether transmitter created or strobe created is really the only problem I have with the RT610.

To delve into this further I took some shots of a white board at different power settings to better grasp this light’s overall consistency.

The only thing that concerns me here is the shutter sync issue at 1/4 power. In this case I was using the Canon 600EX II-RT to trigger the Orlit strobe, as I mentioned I noticed sync issues with Orlit’s own transmitters so opted for the Canon here. If you take away that one fault it’s a pretty exemplary performance. For this image I used a custom white balance for 1/1 power and applied the same settings to the rest of the power levels to reveal any color shifts at different power levels. The darkening in the corners of the lower power settings is caused by vignetting at wide apertures.

No review is complete without some example shots! In the following images I had two lights, the RT610 as a key light and the RT601 as a fill light. Both are made by Orlit and they performed admirably.

One thing I noticed during this shoot is that while both lights can recycle quickly, the RT601 can’t quite keep up with the RT610 if you really shoot fast. If I had to recommend one or the other I would say go for the RT610 even if you don’t need TTL.

As long as you are willing to work through some of the minor issues with the Orlit RT610 I think it represents an excellent value for the money. If you absolutely must have a battery operated strobe I don’t think there is a cheaper one on the market sitting at or near 600Ws of power. At this price relative to some of the competition just working is a miracle in itself, and considering it works pretty great I find it hard not to recommend this strobe.