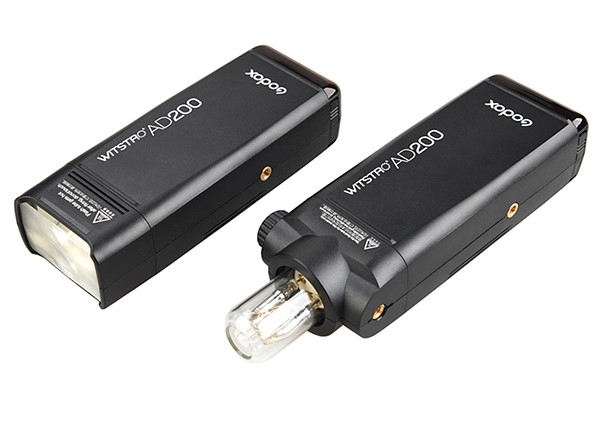 The Godox AD 200 is a compact battery powered strobe made by Godox, a photographic lighting company based out of China. They offer a wide range of lighting solutions from on camera flash to full size studio strobes. The AD200 falls somewhere in the middle aiming to be a higher power light in a similar form factor as the average on camera flash.

After opening the package the first thing you’ll notice is that it comes packed in a stylish case that keeps it and its accessories nicely protected. Removing the flash from its padded slot its about the same size as a standard speedlight but packs significantly more power at 200 watts. It’s also fairly heavy and robust feeling which I’m guessing is related to the high build quality. Overall it appears to be well made though clearly not weather sealed in anyway.

After removing the flash and inspecting it I got the battery started on its first full charge before testing the flash. It charged relatively quickly, getting to max in about an hour. One nice thing about the battery is that there is no battery door on the flash, the end of the battery simply serves as it’s own battery door making it very easy to insert and remove in the AD200.

Once the battery charged up I put the AD200 on a lightstand using a Godox S-type bracket. Of course you can use the included stand mount but I prefer the S-bracket because it gives you a bowens mount to use with many types of lighting modifiers in addition to umbrellas. Speaking of modifiers, the form factor of this light makes it usable with the popular Mag-Light attachment that fits over the head of the flash. Just another option that is possible with the compact design of the AD200.

The form factor of the AD200 makes it great as a walk around light that you can put on a stand and keep with you as you shoot an event. With it’s low weight at 2lbs and compact size a lightweight lightstand will support it with ease and you won’t have too much trouble carrying it with you from spot to spot.

The AD200 is specified as having 200 watts of power, which seems about right in my testing. Yes it is more powerful than my Canon 600EX RT II, but what does it really equate to in the real world? In my testing I found that it was about 2 ev brighter at full power when using HSS with the fresnel head. Surprisingly the included bare bulb was somewhat lower power. That’s about quadruple the light output of the Canon flash. To have all that power in such a portable light is super convenient and makes on location shoots just that much easier.

At full power the rated recycle speed for the flash is 2 seconds, which isn’t super but is usable. However at 1/4 power and lower it recycles almost instantly. In all my time shooting with the flash I never noticed the heat protection kicking in although I was using it indoors in a temperature controlled environment. When summer returns I’m sure I’ll get a chance to test it outdoors in the heat. Given that even at 1/4 power it is still as powerful as my Canon flash, I’ll take the AD200 for my off camera needs.

I was able to pick up this flash and get it connected to the Godox Xpro transmitter with ease. If you’ve used radio triggered flashes before there are no surprises here. Simply set the group and channel you want to use and start shooting. Adjusting the light settings on the Xpro transmitter is intuitive, just hit the button next to the group to select the flash you want to adjust and press the appropriate function buttons, it’s pretty self explanatory.

The back panel of the AD200 has the standard array of functions with a dedicated button to set the group and channel. You can set other adjustments on the flash directly as well. You won’t need to of course if you’re using the Godox transmitters but the option is there if you’re using the built in 3.5mm sync port.

Another nice feature of this system is that more than one photographer can make use of these lights simultaneously, all you need is two or more transmitters set to the same channel and you’ll be sharing light with your assistant or friend.

No review is complete without some example shots. I found that this light has more than enough power to fill out a large umbrella or moderate sized softbox. The following shots were taken in a studio with a large umbrella.

Considering it’s competition the AD200 is well priced at $299. It’s a simple no fuss type of deal. Considering the relatively low cost I have to say I am really impressed with this flash. It offers great power and usability in a compact package. I think it fills a niche that hasn’t really been addressed which is a legitimately portable light that has the power to place it in a category above your typical speedlight.

Is the Canon EOS R5 worth it?