How to photograph dragonflies. 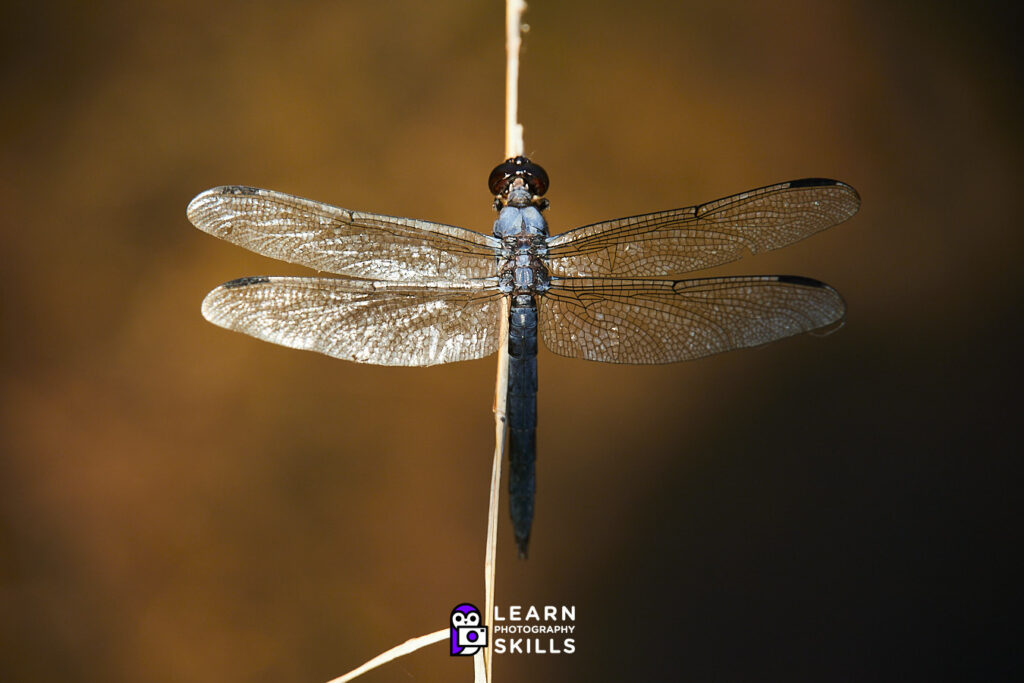 I have gone out and photographed dragonflies near my home dozens of times and I have learned a few things in the process. When I initially approached photographing dragonflies I was very focused on getting as “zoomed in” as possible but this presents its own set of challenges. Over time I developed other strategies for getting great dragonfly shots that I hope you will find useful.

What is the best lens for photographing dragonfly’s?

I wouldn’t go so far as to pick a certain lens as “the best” for dragonfly shots. I have had success with a wide range of lenses.

For the above shot I used a superzoom. No, I can’t really get this close with the lens but even though it is a relatively cheap lens, when it is stopped down it is still sharp enough to be cropped in for this relatively closeup image of a dragonfly.

Below is the full image:

The reason I mention superzooms first is because it is probably the one lens most people are likely to have in their bag and easiest to acquire if you don’t have one. Of course the superzoom is great for all kinds of photography, that’s sort of the point of such lenses, they’re a jack of all trades type of solution.

Here are a few more shots taken with a superzoom lens:

As you can see great shots of dragonfly’s are possible with a humble superzoom lens.

Even though I enjoy the superzoom I recently started photographing dragonfly’s with a 600mm prime lens and that I think has produced some of my favorite images of dragonflies. The great thing about 600mm is that I can be 6-10 feet away and still get shots that are close enough, but the relationship of the in focus area to the background is nearly perfect. I love the bokeh I get from the 600mm focal length, it really is something special!

The below photos were all taken at 600mm.

I know, some of the shots aren’t of a dragonfly, but it does show how artistic the bokeh can be from these long lenses… Just don’t ask how much a 600mm prime lens costs, it’s one of those “if you have to ask, you can’t afford it” deals. A cheaper and still excellent solution is to go with a 300mm f/2.8 and add a 2x teleconverter. That is actually what I did for all the shots in the gallery above.

For my personal style of shooting I prefer to get more environmental shots of dragonfly’s so I don’t typically go for the true 1:1 macro style shots. Plus, shooting macro level shots can be really annoying in the field because it is hard to focus precisely hand held even with the amazing AF of modern cameras, and being outdoors in the wind and everything can make focusing really close up extra difficult.

While I don’t have a dedicated macro lens I do have extension tubes and I have made use of those for shots of dragonflies many times.

The following 5 shots were all taken with a 70-200mm lens and macro extension tubes:

It may seem like using extension tubes is an easy win… Well, it is and it isn’t. In addition to losing infinity focus there is one other even worse downside… extension tubes lower the brightness of the image projected by the lens. So in addition to needing to stop down when very close to your subject you are also losing light relative to the length of the extension tube. And for a telephoto like a 200mm you pretty much need 50mm or more of extension tubes to see a sizable gain in the maximum magnification of the lens. Because of that fact extension tubes are not a great option in the field when it is not bright out. Which brings me to the next suggestion…

Use a flash to compensate for the lack of light due to narrow apertures and extension tubes.

Obviously the flash adds some more light to your imagery so you can take advantage of narrow apertures and still use a low ISO and fast shutter speed. Flash enhanced photos also tend to look a little sharper which is a nice benefit in a game that is all about sharpness.

The photos below were all taken with an on camera flash:

The best angles to photograph dragonflies

The dragonfly’s eyes are often the focal point of their look. So I usually although not always try to put focus right on their eyes just like I would with a person or animal. Plus, their faces are kind of cute in a way aren’t they??

Aside from all the shots shown already, here some more ways to photograph dragonflies if you are looking for inspiration:

The bokeh on the last shot is pretty awesome isn’t it?

The best time to find dragonflies

Dragonflies get active when the sun is out and it is hot. They seem to enjoy the heat. If you want to see the most dragonflies in action, during the day in the summer is the best time to find them. Many city parks and ponds have dragonflies zipping around by the waters edge during the summer months.

The worst time to find dragonflies is going to be any other time of day. You might be tempted to go around the evening time but by then many dragonflies are already getting ready for bed. They spend the night sleeping and will often wake up in the mornings covered in dewy drops of water.

Another bad time to find dragonflies is after it rains. They apparently seek shelter in the rain and seem to simply hide out until the next day even after the rain stops. They really just prefer bright, hot summer days.

The best places to find dragonflies

My local city park seems to have lots of dragonflies. Dragonflies are a key part of any healthy pond or lake ecosystem so those are typically the best places to find them. They don’t like moving water very much though so large lakes tend to not have as many dragonflies buzzing around. Dragonfly larvae play an important role not only as predators but as prey. Their larvae are voracious eaters and mosquito larvae are one of their favorite snacks. I seem to notice that when there are lots of dragonflies around nuisance bugs like mosquitoes are a little less prevalent.

Dragonflies have a tendency to return to the same perches over and over again. So if one flies off before you get the shot, hold still and be patient as it or another one will probably return to the same spot after a few moments.

Younger dragonflies are a little slower and lazier than their larger and more grown up counterparts. If you are having trouble approaching dragonflies the smaller ones are usually a little less flighty and they tend to land more too. Larger dragonflies sometimes seem to take to the skies and stay their forever so it might not even be worth it to try and get a shot of them.

If you’ve been hanging out in a spot with dragonflies they’ll start to adjust to your presence. So if you walk into an area with dragonflies and they all seem to scatter, again, just be patient, eventually they will adapt to you and be much less likely to take off at the slightest movement.

Certain species are more flighty than others so the way I look at it is those rarer and harder to approach dragonflies are more special to get shots of.

Dragonflies are interesting creatures that come in a wide range of colors, patterns, sizes and shapes. They can photographed in a myriad of ways either as part of their environment or with extreme closeups showing the striking details and colorations they carry.

Whatever you choose to do, just try to have fun and enjoy the outdoor world with your new dragonfly friends.

How to take urban portraits at a graffiti wall.