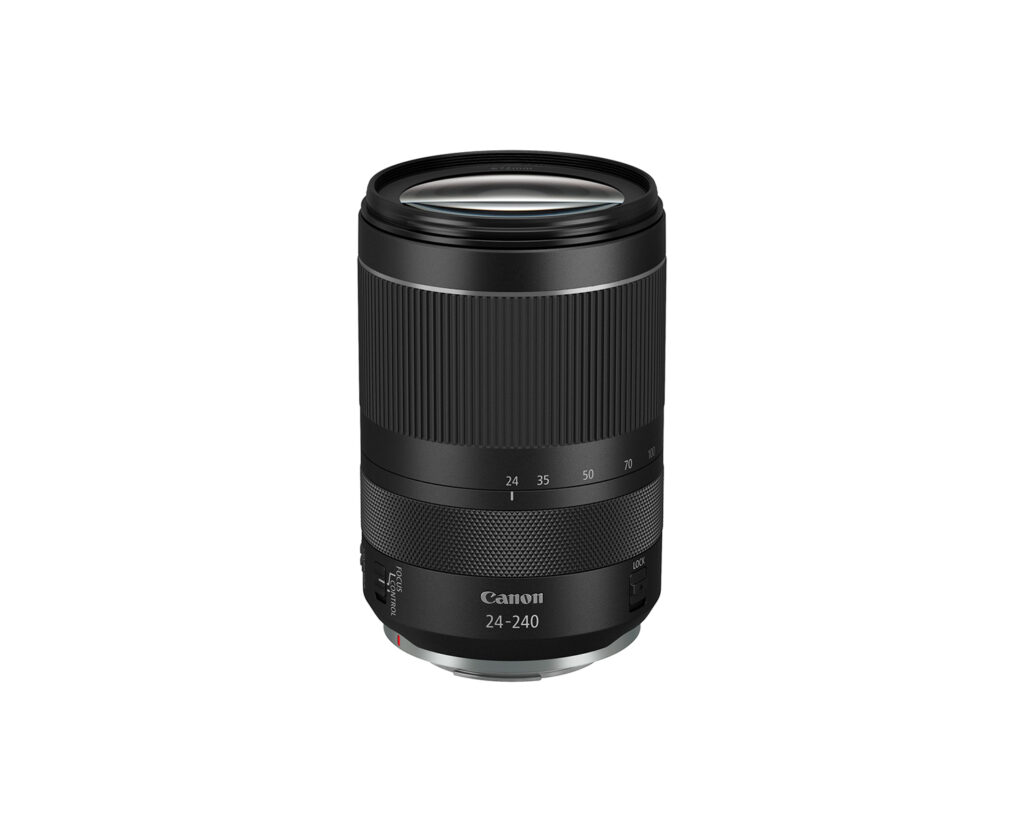 The RF 24-240mm f/4 – 6.3 zoom lens from Canon is a full frame mirrorless lens in the higher end of Canon’s prosumer lineup. This lens is unique in that it is a 10x superzoom covering a very useful range for many types of photography. This is a mirrorless camera lens for the Canon RF mount. This lens is nice because it manages to achieve what it does in a relatively light and compact form factor. For comparison, it isn’t much bigger than the Canon 18-135 EF-S lens despite delivering similar results for FF as opposed to APS-C and having close to double the usable zoom range. I think Canon really did well to keep this lens small and light while achieving an acceptable level of performance across the entire zoom range.

The lens has an acceptably good fit and finish as do all the RF lenses. However it is all plastic, which presumably makes it lighter, but perhaps not as nice to look at. It’s not the most beautiful lens when zoomed all the way in either, but it is sleek looking when stowed and the barrel is locked. The lens features a solid and well weighted zoom ring as well as a smooth rotating dual-purpose control/focus ring. Using a switch on the side of the lens its possible to switch the focus ring to a control ring that can be configured in camera to change different settings such as ISO. It should be noted that manual focus is achieved digitally as it is a focus by wire system. This means that turning the focus ring tells the AF motor to adjust focus rather than the ring mechanically driving the focus mechanism. Some users may find this odd at first but in practice I found it easy to use. As mentioned earlier the lens is light at 1.65 lbs. considering that it reaches all the way out to 240mm. Of course, the lens has an external zooming setup so the lens changes length as you zoom in to 240mm. And the final detail is a switch to turn IS on or off.

Canon claims 5 stops of IS, which if you follow the general rule that your shutter speed should be at least equal to your focal length, means that a normal shutter speed of 1/25th at 24mm equates to a 5 stops lower shutter speed of 1 1/3 seconds. I found that I could actually shoot at 24mm for 1 second although my hit rate was only 10-15% and I had to hold as still as I possibly could. But it is possible. At 240mm the general minimum shutter speed of at least 1/250th equates to a 5 stops lower shutter speed of 1/8th of a second. When testing the telephoto end, I found my shots were in focus close enough about 75% of the time which is much better than the claims at 24mm. The main reason for this discrepancy at the different focal lengths is that the movement is additive and more random over time. For the entire period the shutter is open the sensor is recording the scene, so whatever movement happens in 1/8th of a second is multiplied by 8-9 times by dropping to 1 1/3rd of a second. So, the IS system actually needs to be better the wider the lens is to maintain the 5 stops claim, which might be counterintuitive.

The range on this lens is probably its biggest selling point. I don’t think most people who buy these types of lenses are doing so for any other reason than wanting the most range in a lens that they can get in a reasonable form factor. This is currently the largest zoom range available for the native RF mount so if you own an EOS R or RP and you want this kind of lens, this is basically your best option. Canon does make some decent EF mount lenses of this type like the EF 28-300mm f/3.5 – 5.6 L which will work fine on the RF mount when using the adapter. However, the RF 24-240mm is obviously a very similar range and is less than half the cost new and much smaller and more portable than its bigger EF brethren. Zoom range at the wide end is one area where RF mount lenses have a huge advantage over comparable EF mount lenses. This advantage is due to the proximity of the lens to the sensor. With EF mount lenses the back of the lens must be mounted further away from the sensor to make room for the mirror. This results in some limitations for wide angle lenses in particular. All this allowed Canon to engineer the new RF 24-240 to be one of the best performing lenses of its type and hopefully Canon will release other even higher performance zooms in this range in the future.

The One-Shot AF on this lens, like all the RF lenses, is quiet, reliable, and consistent. It is not the fastest focusing RF lens, but it is very good. I only notice the occasional issue at 240mm where the camera would initially rack focus the wrong direction before correcting and getting the focus right.

The servo AF was generally good on this lens, but I did notice that at the longer end, particularly at 240mm, it tended to slightly miss focus. I verified this by setting up on a tripod and manual focusing the lens perfectly. Initially I thought the lens might not be sharp at 240mm, but it is actually quite sharp when focused properly.

The optical performance of the lens is good across the frame at all focal lengths. It should be noted however that this is a new class of lens that is designed intentionally with optical aberrations like extreme distortion at 24mm that are supposed to be corrected digitally. The camera will apply these corrections automatically if you’re shooting JPG, but you will need supported software such as Adobe Lightroom or Canon’s own Digital Photo Professional if you want to process RAW files with all the automatic corrections applied.

You can easily see what I’m talking about in the following images. On the left is the corrected image, and on the right the uncorrected image:

For your convenience, below are the top left corners of the images:

The CA may look bad in the uncorrected view but it’s actually not as bad as it looks. It is completely removed in the corrected image with little or no visible image degradation in this particular example.

If you’re experienced with correcting heavily distorted images you may be aware that the focal length of the image will be reduced when the image is corrected and cropped to fit. Luckily, Canon has thought of this and the uncorrected 24mm view is actually a little wider than 24mm which results in the corrected image being cropped to 24mm.

It may seem wrong on some level, but compromising on performance and fixing it digitally was a smart move on Canon’s part to broaden the appeal of this lens. Canon’s engineers have stated that the compromises they made allow them to achieve a level of optical performance not seen before in a lens of this type. And seeing that my copy is sharp from 24mm all the way to 240mm, I believe them. Considering the size, weight, and price, it’s a great lens to have in your bag no matter what you shoot.

The one drawback of this lens is of course the relatively small maximum aperture. Ranging from f/4 to f/6.3 at the telephoto end I was honestly surprised how quickly I had to bump up my ISO shooting with this lens. On a walk through the woods on a cloudy day I found myself frequently hitting 4000 ISO even with the shutter speed down to 1/160th of a second for telephoto shots. It’s a good thing then that the stabilization is reliable or else you’d really have trouble using this lens in a lot of situations.

The Canon RF 24-240mm is the first superzoom that photographers really serious about image quality could consider using thanks to the available automatic corrections. As long as you understand its limitations, I think that even demanding photographers can get print worthy images using this lens. It is particularly well suited as a walk around lens for travel or sightseeing. It could even work as an excellent street photography lens as its 10x zoom range and relatively compact size will keep you from being too conspicuous out in public. But don’t let that stop you from using it for more traditional photographic pursuits like portraiture. No, it doesn’t have the image quality of the RF 85mm f/1.2 L, but it will take group shots as well as head shots, something any prime lens will struggle with.

All things considered I highly recommend this lens.

Lightweight, great for travel or walking around

Quiet and accurate autofocus most of the time

Some unreliable focus behavior at 240mm

Uncorrected image quality looks worse than it actually is