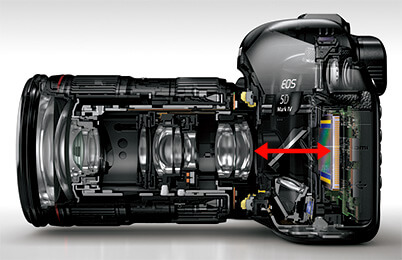 Now that Canon and Nikon are on the mirrorless bandwagon and apparently taking it pretty seriously, it makes sense to discuss the differences between the two types of cameras.

The main difference between a DSLR interchangeable lens camera and a mirrorless interchangeable camera is that DSLR’s have a mirror inside them and mirrorless cameras don’t. In a DSLR the mirror reflects the image from the lens into a prism that flips it around so it looks correct when looking through the optical viewfinder. The biggest drawback of DSLR’s is that the mirror has to move out of the way each time the shutter button is pressed. And since the mirror has to be moved using a flipping motion there needs to be space inside the camera for the mirror to move around. This space is commonly referred to as the “mirror box”. The addition of the space increases the back-focus distance of the lens used on a DSLR. This is why if you have used a DSLR lens on a mirrorless camera the adapter adds like an inch of space between the actual camera mount and the lens mount.

In a DSLR the mirror is also integral to the function of the phase detection autofocus system. Behind the main mirror there is another smaller mirror which sends light to the autofocus sensor. In any DSLR with autofocus the main mirror is actually semi transparent, sort of like a mirrored window pane as opposed to a true mirror like what you would have in your bathroom. The light that is allowed through the main mirror is used for autofocusing and metering in a DSLR.

In DSLRs that have AF the type of AF is known as phase detection AF. This type of AF allows the camera to easily tell if the subject which is blurred is in front of or behind the current focal plane of the lens. On the other hand many mirrorless cameras use what is known as contrast detection AF. This type of AF analyzes the image from the sensor and looks at higher contrast areas to determine whether the image is in focus. The big drawback of contrast detection is that strictly speaking, a contrast detection AF system does not know if the subject is in front of or behind the current plane of focus. This results in a phenomenon known as “pulsing” which is a rapid back and forth movement of the focal plane.

However, some camera systems such as Canon RF use a specially designed image sensor to achieve phase detection. This image sensor is called a Dual Pixel AF sensor.

This ends up being an advantage for a DSLR because the main sensor is allowed to be off most of the time. Keeping the main imaging sensor off saves battery power and lowers heat production inside the camera, and it allows the sensor to perform at a slightly higher level. If DSLR’s had the same quality sensors in them as mirrorless cameras there would be a distinct advantage in noise and overall image quality for the DSLR.

On the other hand, a mirrorless camera has some major advantages with its setup. The first is that the mirrorless camera is lower complexity which means there is a little less that can go wrong with it over time. Another big advantage is that since there is no mirror to move, the AF systems can run constantly which improves the accuracy of subject tracking.

Physically, a mirrorless camera body is typically smaller and lighter than a DSLR camera body making mirrorless easier to transport and carry around. If you are a professional who has multiple cameras these differences add up, especially when trying to fit lots of gear inside a carry on bag or hard case.

Despite that I still prefer mirrorless cameras because I like not having to look through the viewfinder all the time. Being able to use the rear LCD screen is a great aspect of using a mirrorless camera. It makes taking pictures at odd angles super easy and fun to do. If you work with people it makes getting different kinds of shots a little faster and less distracting to your subject.

While it may seem that DSLR’s and mirrorless cameras are totally different from one another, they aren’t. They’re much more similar than different as a lot of the technology used in mirrorless camera comes from or exists in DSLR cameras now. This includes things like Dual Pixel sensors. Many of the latest DSLR’s can essentially function in a mirrorless mode where the mirror is locked up and the camera then basically works how a mirrorless camera does.

One nice thing about Canon and Nikon DSLR cameras is that they use the same lenses as a film camera. This means that you can have the same investment in gear and still shoot both a film camera and a digital camera.

Ultimately the DSLR is the kind of camera to get if you prefer optical viewfinders and want to use your lenses on digital and film cameras while mirrorless cameras are the camera to get if you can live without the optical viewfinder and you only care about digital photography. Both camera types can get the job done. Just pick what you think will work best for you and take pictures!

Stop judging your photos by how many likes you get